…in which I tell you in my usual, self indulgent way what panels and talks I attended, what the whole experience was like etc. The full programme schedule is still available here. Part 2. covers Wednesday and Thursday! 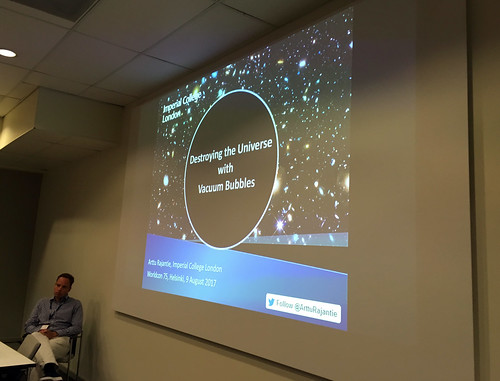 I was a bit surprised that Worldcon was a whopping five day event, and hadn’t really prepared for it… should have taken the week off from work but didn’t, so unfortunately the first three days I couldn’t attend the program during the day. But kudos to the organizers for packing a massive amount of events into all five days,  lots of stuff to experience and enjoy.

Running (well, taking the bus really) to Pasila after work, I excitedly got my Worldcon 75 -badge and strolled around for a while getting a feel for the  atmosphere and taking some mental notes:

Well, those were my impressions before I went to the see the talks in the conference rooms… 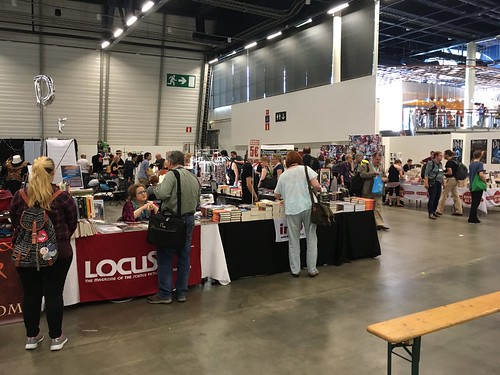 As a science geek, my obvious first stop was the physics talk “Destroying the Universe with Vacuum Bubbles” by Arttu Rajantie, in which he explained how stuff related to the Higgs boson and quantum mechanics can, or rather *will* cause the end of the universe at some point. Nothing to be really worried about, though, just a theoretical event that takes places billions of years from now and accelerating the process seemed to require amounts of energy with the need for technology like machinery that can consume entire galaxies in order to speed things up, so… keep calm! Still, a nice snippet of science that has apparently already been used in some stories.

Read a brief version of the theory here (Cosmos magazine).

(Now, after a good start I decided to take a break and have a beer and plan my next move, because I hadn’t really checked the schedule in advance because… well, that’s just how I roll, I like to plan out some things but mostly improvise. Because I’m lazy. There, I said it.)

Next stop was going to be the “Infamous Bad Books Covers“-panel, which seemed interesting just based on the title, and then it was time to go home. Well, turns out  Worldcon had sold an unusually large amount of memberships in the last days, causing capacity problems in the individual rooms. Finland is a small country after all, and most of the meeting rooms are small, meant for maybe 50-100 people. With over 10000 attendees at the con there were certainly going to be certain events that more than 50 people wanted to attend, no matter what. Meaning, when I went to the panel half an hour before it started, the room was already full.

As I’ve been to some conferences before, this is sometimes just how it is – you can’t attend two interesting events in succession, but need to pause for one hour and start queueing well in advance for the next during the following hour. On wednesday the situation was probably worse than usually in these cases but the arrangers did what they could to smooth out things by getting more space from the venue (which is usually expensive) and shuffling supposedly more popular talks around… so, once you got into the rhythm of “one hour event – one hour pause – one hour event – one hour pause…”, it was easier to plan ahead.

Missing out on the bad book covers, I quickly checked the online schedule for a Plan B, and found it almost immediately – a panel called “Queer pirate smut fantasy” where some female authors discussed… well, precisely what the title says. Plan B definitely succeeded in providing a suitable level of entertainment, because of course I’ve always liked pirate stories. Who doesn’t?!

To sum the first day up: two nice talks, a cold beer and getting a feel for what the whole event was about. 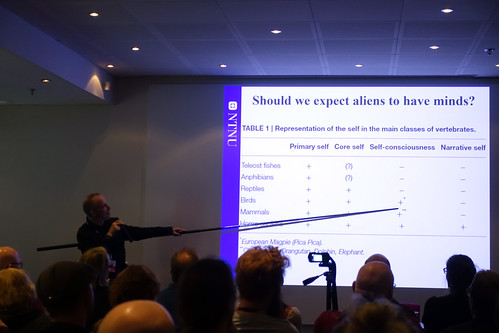 Authors reading excerpts from their books might not sound that interesting, but on Thursday there was the chance to see and hear Scott Lynch live so that made the event compulsory for me. He is, of course, the father of the Locke Lamora fantasy books, a.k.a. The Gentlemen Bastards -sequence. With Patrick Rothfuss and George RR Martin he sort of forms the holy trinity of contemporary fantasy.

First, however, there was this guy I’d never heard of – Lawrence M. Schoen – reading stuff from his books. Both he and Scott Lynch were very funny and verbally gifted in person, making small quips all the time which made me think that somehow Americans are so much better at talking than Finns. Mr. Schoen’s reading seemed to revolve around some comical sci-fi series of his, and not knowing the main character I didn’t get that much out of his story other than what seemed to be something that fans of the TV-series Babylon 5 or perhaps Killjoys might enjoy. Mr. Lynch then took the stage, and he’s actually also a very broad shouldered and handsome guy in person (also a trained firefighter), so not all fantasy authors are these nerdy looking guys, you know! “Damn, if I only looked like that”, I thought.

Scott Lynch didn’t read anything related to his bastard gentlemen, but instead an excerpt from a forthcoming anthology short story.  He has a really great writing style, and the tale of the – apparently – unlucky swordsman sucked you right in with its narrative. I highly recommend the Locke Lamora books as they are something special definitely, but it was also nice to hear something outside of that realm as well.

Next up, after a pause (because the queues, y’know) I listened to another science talk:  What science can tell us about alien minds.  It revolved around contemplating what the odds are that conscious minds evolve on different worlds. The examples were definitely familiar stuff from my biology days, and the talk almost turned into a lecture on primates at some point perhaps even going slightly off the rails. But the conclusion of the talk was probably that yes, minds developing through evolution is not too improbable an event as to make the situation on Earth a one-off happening. In fact, on our world other animals beside humans have been found to have some form of consciousness, like squids. But readers of Lovecraft already knew that…

Last but not least, I listened to an enlightening talk with some publishing house editors about “the slushpile“, i.e. when unknown authors blindly send their manuscripts to publishers with the hope that the brilliance of their submitted work just shines through the text… and really, I sort of guessed but had no idea that it is *so not* the way that talent gets found. At all. Writers almost always come through agents who the editors know, and even then their works are most of the time dismissed.

Apparently, a lot of the writing sent to the slushpile seems to be quite bad anyway but some good tips were given if you still want to try: write the best stuff you can write (without typos), send in your manuscript in *paper* and just the first 30 pages or so… if it’s excellent, you’ll perhaps (even then unlikely) be contacted for more. But, getting a name elsewhere and an agent seems to be a better way to start your career.

So, writing and getting published as a total unknown by just sending in your manuscript does seem like a gargantuan task!

After this talk I so did not feel like quitting my day job to become an author – back home to sleep and an always enjoyable bout of office work the following day before Worldcon REALLY began!

…to be continued in Part 3.