I’ve never been that much of a car buff, honestly. As a kid, yeah sure, but later on in life environmental ways of thinking caught up with me and I wasn’t really a big fan of motorsports or basically anything involving the petrochemical industry. 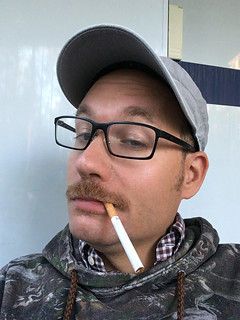 Yet, in Finland you can’t escape the legacy of the Formula One and Rally icons – even if you don’t follow any sports, the moustached faces of Keke Rosberg and Juha Kankkunen are as instantly recognizable as any household item, like Melitta coffee filters or Sultan condoms.  It’s like motorsports was somehow embedded in my DNA as well, because in spite of every instinct saying “motorsports is just big money silliness and boys playing in a sandbox with bigger toys and it *sucks*!”,  my heart always skipped a beat when seeing a sporty Peugeot 205 and I had dreams of sitting in one gliding at inhuman speeds on sandy roads, dressed in a racing overall and baseball cap with a big moustache to complete the look…

(OK, that last bit starting with the dream was maybe slightly fabricated, but you know what I’m getting at) 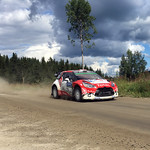 So, I have this childhood friend who’s quite a rally fanatic, to whom I annually answered “no” when he asked me if I wanted to join them for a trip to the rally. It was sort of a tradition, once he even phoned me from the rally and shouted “listen to this sound!” and held his phone towards the road when a rally car passed by at full speed, thinking it might be like an elk’s mating call in my ears. I was maybe amused, but not very impressed then as I was currently enjoying a very, very nice view in Lofoten, Norway. (And by view, I mean actual scenery and not a woman if you were thinking I was insinuating something…)

But then I recently reached a point – crisis point, some might say – in my life, that basically got me thinking that “What the fuck, I have nothing to lose, life is slipping away and I there are so many things I haven’t experienced yet”.

Meaning, in the summer of 2016 I actually answered “I do” and went to see the Jyväskylä rally for the first time in my life. And in 2017, for the second time. And, as a result, it might be that I’m now possibly a better man, or at least a better Finn because of it. Why? Because I have taken part not only in Finland’s biggest international annual sports event, but I also experienced a part of the culture that has always been there in the shadows forming my identity as a Finn. Maybe it also helped strengthening the bond with my rally friends, maybe it even got me closer to understanding my late dad (who was crazy about motorsports and passed away when I was 5 ) and the psyche of the Finnish male in general? The fuck I know, but here’s what I learned. 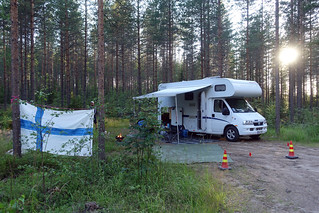 So I joined the expedition, which consists of a small group of friends who rent a campervan for the occasion – a maximum of six people. Now, this group has a true and tried strategy that to me sounds more honest and hard core than the way most people visit the rally nowadays.

Usually you have to pay for a rally pass to visit the special stages, where there are spectator areas strategically laid out on the best places and where people crowd and drink beer from vendor tents and generally have a good time. The public roads that are being used for the special stages are closed well in advance, so only people with rally passes can walk afterwards to the designated places.

Well, the Real Rally Way™ consists of not paying for hotels or rally passes, but driving the campervan the day before the road is closed to some place along the stage where it is possible to park the van and set up a camp in the woods. Eating, drinking and Real Men™ -talk ensues. Then come the morning, we go and watch the rally (two runs usually with some hours between them) and when the roads are opened again, we set course for tomorrow’s special stage.

This requires some work and experience of things, i.e. planning which special stages to visit and then actually finding a suitable spot on the special stage road itself before it is closed. This is trickier than it sounds as the campervan is pretty large and suitable intakes along the road are hard to find. Especially since most small forest roads are blocked with logs, ropes and warning signs by local inhabitants who don’t apparently want rally fans on their lands. Of course, our group always behaves nicely and cleans up its trash so it is irritating that idiots who behave badly probably have caused some backlash against the Real Rally Way™.

The Essence of It

Of course, like in any good trip where you hang out with a group of friends intimately for some time (when you wake up in the morning, some other guy’s hairy naked butt is probably the first thing you see), after the shared experience you are an even better group of friends than when you left home.

Of course you enjoy plenty of good food and drinks while you’re at it. And if you want some partying, there’s a real carnival-like mood in the Jyväskylä city centre. So yeah, in a typically finnish way, this is a good excuse for consuming large amounts of alcohol again. We camped in the city during the Saturdays of both years; on my first trip we even visited some actual bars as I met a friend from work who’s from Jyväskylä, but this year we basically just hung out in a park and chatted amongst ourselves, and thought that the woods were actually a better place to be in. We were there for the rally, after all, not the party. 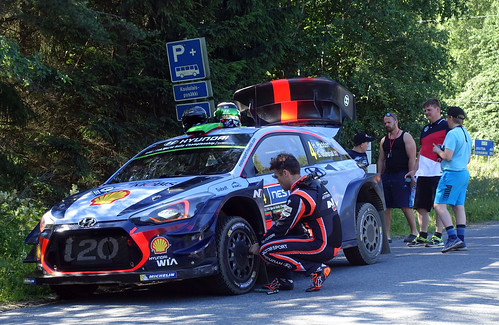 You also get closer to the rally drivers than in Formula One, for example, especially during the transition stages. So even if it is a big competition with  substantial money involved, the drivers & co-drivers feel more down to earth and humble than most top athletes, which is a good thing in my book.

But why sit in the woods and watch as a car passes by for a mere few seconds, spitting gravel on you? Because that is what basically happens, you only see a small part of the road and the rally car for a second or so. Well, because that’s it. The essence of rally. It is so impossible, the speed with which the cars fly by on roads you yourself can drive on normally, and that growling sound – like a dragon flying over the forest… somehow, it is awesome.

Experiencing the rally in Jyväskylä is therefore a quintessential Finnish experience. Or in other words, rally is like… well, like drinking huge amounts of carbon based fuel and shitting out a diamond. 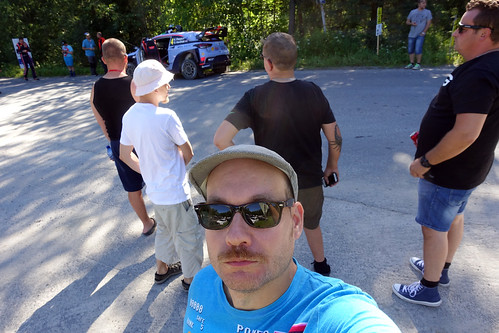