…in which I tell you almost nothing about Worldcon itself, skip to part 2 for that. 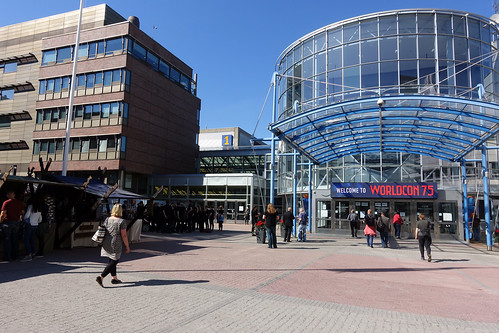 Introduction (with boring details of my non-existent fan credibility – why make it this long? Yaaaaawn…)

My first exposure to a science-fiction and fantasy convention was way way back in my high school years in 1993, when I accidentally read somewhere that Terry Pratchett  was visiting Helsinki. He was my #1 favourite author then so that piqued my interest and even two friends from school tagged along as well. The event took place in Vanha ylioppilastalo (“Ye Olde Student House”) in the city centre, and immediately as we walked into the crowded building a couple of guys dressed as Star Trek officers pushed ahead of us shouting “Make way, make way, Starfleet coming through!” Me and my friends looked at each other and were like “whaaaaat the fuck is this…”.

It was a brief but fun visit as we listened to Pratchett’s Guest of Honour -speech in which he, IIRC, was talking about fandom and made one particular comment that went something like “Star Trek fans are the lowest form of life on earth”, drawing laughter from the crowd as my friends and I exchanged cunning nods, thinking of those Starfleet guys. Fun fact: without attending that event, you’ll have a hard time fully appreciating one of the small footnote-jokes in Pratchett’s novel Soul Music.

The first real con I properly attended was Finncon in 2009, Helsinki yet again. Not that many Star Trek uniforms anymore, cosplay was now a thing and this was an anime event as well so cue all kinds of Japanese comic-/game character outfits. The scene had really changed since 1993 and it was now cooler to be a fantasy/science-fiction fan – I secretly wished I was a teenager in this new era as there were plenty more members of the opposite sex geeking around now.

Finncon ‘09 was an absolute blast, with a great evening party as well. George RR Martin, Alastair Reynolds and Adam Roberts were all very interesting author guests that you actually had time to chat a few seconds with during book signings and you saw them up close in many events including the evening party. I even talked randomly with some strangers there, which almost never happens in Finland, and I’m not a great conversation starter either so it was really rare for me – probably as rare as strangers in Italy *not* talking to each other on a bus ride.

So I had this pretty good feeling that these kind of events might actually be my spiritual home. Especially as the author talks about writing sort of made me have aspirations of actually turning some of the story ideas bouncing around in my head into reality.

(the lazy fuck I am, of course nothing much happened after that initial burst of creative excitement) 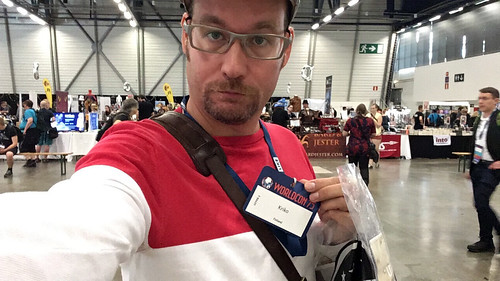 Now, enter 2017 and as I for many years had followed the blog posts of the reasonably famous fantasy author George RR Martin I knew that this historic event called Worldcon was going to come to Finland, no doubt partly as a result of GRRM enjoying the 2009 Finncon as much as I did. Messukeskus in Pasila is not the most scenic location so I was a bit worried about that, but there are not many go-to places in Finland for events of this size. I really liked the old cable factory the ‘09 Finncon was held in but that place would have been too small. Still, I was actually worried that people wouldn’t come to Finland at all, but happily (and slightly unfortunately for some of my friends who were interested in one-day tickets) that proved to be an unwarranted fear.

So, I bought the First Worldcon membership and joined in on the fun. Now, what exactly happens at a convention? It’s not really different from the kind of seminar events that you sometimes attend to in the line of your studies or work – there are displays of artwork or other geeky stuff (think: posters at a science conference), a commercial area where you can buy books & stuff, rooms with panels or talks to attend and larger auditorium events like the award ceremonies or famous author interviews (“key note lectures”). And instead of, say, doctors meeting at the Nebraska Colon Cancer Research Seminar XVII, you will instead be surrounded by colleagues of another kind – fantasy and sci-fi -geeks.

It has to be said, that I had never before seen so many geeky people in one place (and some of them really old dudes!)… and it was kind of cool. I felt like I was home again. Somehow this was akin to a pathologist finally being able to enthusiastically have a conversation about dissecting dead people over a cup of coffee and blueberry muffins with strangers from different countries like it was the most natural thing in the world. 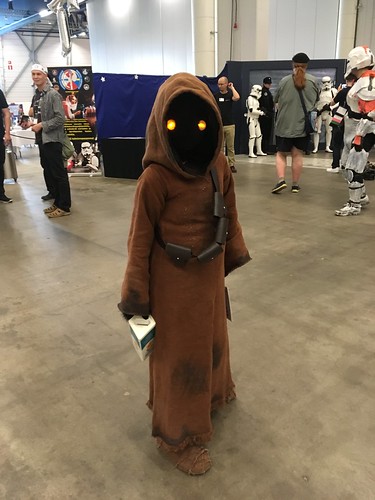 Geeks, nerds… now, as an aside, using those words is something I’m a bit cautionary about as there is a slight difference in the meaning of “nerd” and “geek”. Both terms describe, in my opinion, that a person is interested in something that is considered a bit outside of the Gaussian distribution of predictable stuff you’re supposed to be interested in, like sports or fashion. An interest that has a component of non-useful unrealism attached to it, very much also a certain innocent playfulness like the games of children. Or a field of interest that is just plain unsexy in the eyes of the general population, like entomology.

In my mind, the term “nerd” is just slightly more negatively perceived while “geek” is a more positive description of this kind of person with out-of-the-usual interests – meaning, 1) nerds are personalities so deeply entrenched in their peculiar interests that they can’t adjust to normality anymore and 2) geeks are nerdy but can be just like normal sociable people as well, and might even be handsome/cute. Hence, “nerd” is related more closer with the word “freak” in how I see it used in popular culture.

Now, I’m not sure if I see myself – or more importantly, if other people see me – as a nerd or a geek, but I’ve always considered myself a cool nerd/geek, nonetheless, like now attending the con dressed in italian clothing and smelling subtly of Issey Miyake. And I can talk about other stuff than sci-fi and fantasy as well, like… well, insects for example.

The point of all this being, as I watched these sci-fi and fantasy fans of all ages and countries walk around the fair centre, and while reading the – very American-style – official rules promoting good behaviour at the con (like any normal people would have to be reminded of that) I had this moment of clarity when I realized:  “Oh, just a few decades ago these people (= us) might have been bullied at school and/or considered total weirdos because of these geeky interests… and many of the people here have probably lived through those times, and *this* is their safe place”.

I just had that sudden thought. And then it was gone.

Now, where was I… ah, yeah, maybe time to go through some stuff that actually happened at Worldcon 75, like the Hugo awards! 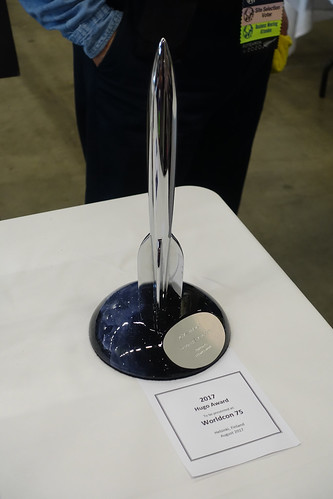 (Next up: Worldcon 75 – Part 2, where I tell you about a lot of stuff except maybe you still won’t hear about the Hugo awards…)