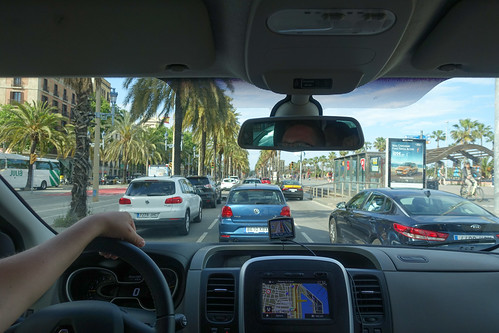 In recent years there has been some backlash against the growing number of tourists, and Barcelona is one of those places [The Guardian]. Partly it has to do with new game-changing services like Airbnb that provide authentic housing opportunities for visitors but also cause surprising negative effects like raising the rent in cities for the locals, and I can sort of understand that if your neighbourhood turns into a party place where you can scarcely afford to live, you might feel just a bit pissed off… But, traveling seems to be mandatory nowadays as flights are still cheap and people tend to flock to the same destinations.

Especially women seem to love traveling (an observation based on my scientifically sound method of er… browsing Tinder profiles). Myself, I don’t like “unnecessary” travelling – I can travel inside my head and enjoy the local beach just fine and be satisfied with that. But if there is an opportunity to go someplace exotic and share the experience with friends – like with this trip – I’ll bite. 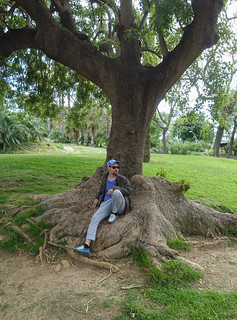 We experienced no tourist rage as people were very friendly and the mid-May vibe in Barcelona city was lush and relaxed.  We made only this one day trip to the city, so of course this was only scraping the surface but my personal to-do list was fittingly very simple: 1) see the La Sagrada Familia, 2) enjoy tapas and red wine at some nice place and 3) get a feeling for the pulse of the city.

As you can see, I set the bar for life goals quite low.

Barcelona is of course home to the world-famous football club FC Barcelona (the name is a clue) with some of the world’s greatest soccer stars. As many of my friends’ kids play football, we started our visit to the city with a stop at the home stadium of Barca: Camp Nou. 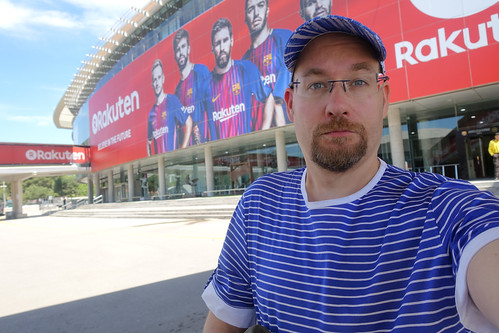 Lots of people, esp. children, noise, FCB-merchandise to buy, a tour of the facilities for 25€… a small-scale Disneyland for soccer-players, that is. Initially we were going to take the tour so we could see the stadium itself, but ended up just hanging around and my friends got some gear for their kids.

Seeing a real game of football at this kind of venue would be great, but we have to leave something for the future… 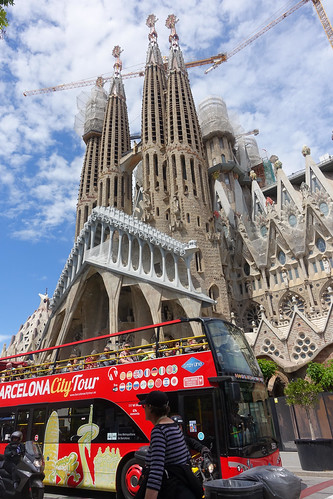 It’s famous. It’s big. It’s a church. And it is still partly unfinished. Architect Antoni Gaudi’s  masterpiece is a must-see, of course, The new and old textures don’t mesh that well (yet, needs some air pollution) and I can’t decide if it’s ugly or beautiful but La Sagrada Familia didn’t fail to invoke emotion. I got the feeling that this definitely is some pop-culture version of classical cathedral architecture, the Ed Hardy or Desigual version of religious symbolism. Brash and playful, with a breathtaking number of details, this is no ordinary building. It is a money making machine for Barcelona, no doubt. 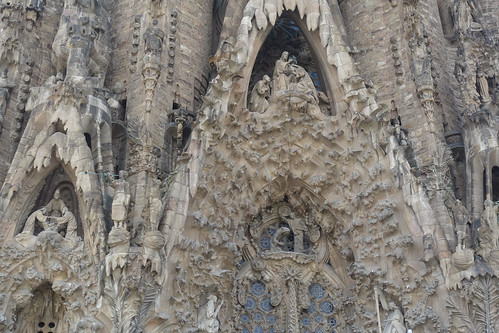 Military police were hanging around nearby streets blocking access to the tourist-filled site with concrete blocks, no doubt as a preventive measure against lorries and trucks manned by crazy (or life-depraved and brainwashed more likely) terrorists.  We didn’t go inside the LSF, but walked around and admired the building from all sides. Even the unfinished side. 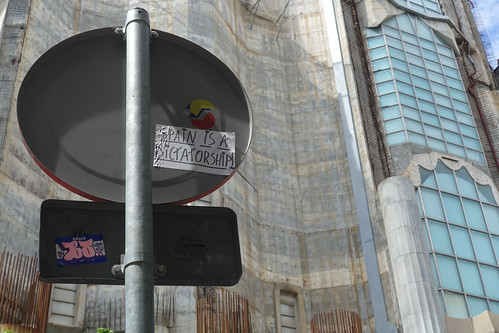 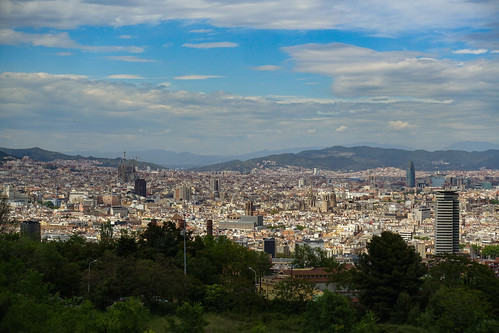 Waiting for the restaurants to open (about 19 –>), we visited a nearby park on top of a hill. There are several and yeah, I can’t be sure of the name now or bother to check Google Maps more closely, but it’s the place were the cable cars go from the seaside, so maybe near Montjuic? We didn’t go all the way to the top, there was this vantage point with a small kiosk that we strolled around and took photos.

The view over the city was good, and certainly whetted our appetites for the next – muy importante! – stop. 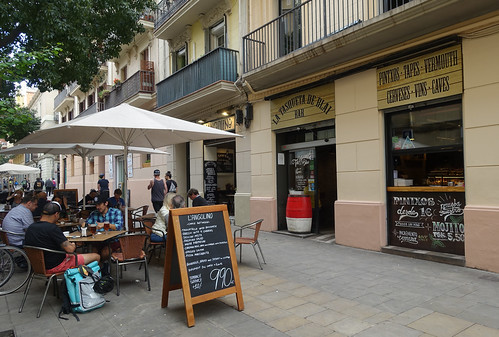 The most important thing to do when visiting a new place, country or galactic civilization is enjoying the local food. Checking TripAdvisor for places that had good reviews, our car passed close to a small place called La Tasqueta de Blai that fit the bill. It had just opened its doors, so it was just as well we were early as seats for seven people would otherwise have been hard to find.

The service was friendly and the tapas selection looked incredible – there were too many varieties to try them all in one setting. Even the 100+ kg buffet gorillas among us couldn’t manage that. The drill was simple: the small pinchos cost either 1 € or 1,80 € and you just went to the counter and filled your plate with whatever selection you wanted. Then you ate those and just kept the sticks that held the small culinary artworks in place initially. Then you went for more. And ate. And refilled your plate with some more choices. And ate. You know the drill by now… 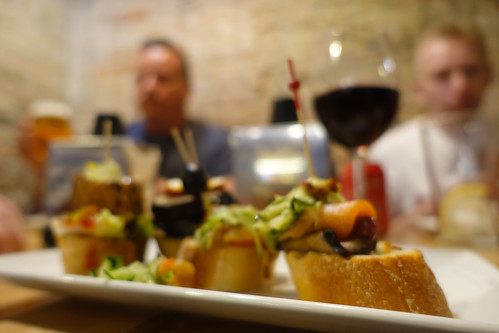 Finally, when you couldn’t eat any more, you counted your sticks and paid according to those (the more expensive options had red-tipped sticks). Very smart and casual system. Barcelona is of course full of places like this, but we were very satisfied with the one we visited. Once again, eating was one of the highlights of the trip and after the Formula One meal disaster we didn’t take any chances this time.

(some music to get in the mood first below)

Before leaving the city, we hit the beach and enjoyed the passing evening breeze. Just like in the town, it was pretty relaxed and quiet but there were people of course playing beach volley, lying on the sand and even swimming although it was probably a cold day for them as it was +20. For us Finns, it was perfect summer weather.

Looking at the sea and dipping the feet in the Mediterranean felt great, there is magic in the oceans.

Then it was back to Argentona and our villa for the rest of the trip, and eventually home where new adventures awaited. I could tell you about the embarrassing hangover I had on the trip back, when for once I was seated next to a single, Brazilian hot woman but better skip that story for another time…

Things to do: All of the things above and more. Yep, I do get it why Barcelona is so popular already from this brief encounter. But running around the city trying to see everything at once is always a chore, so just relax and enjoy the vibe – and drop in for some tapas and wine to get the real feeling for the place.