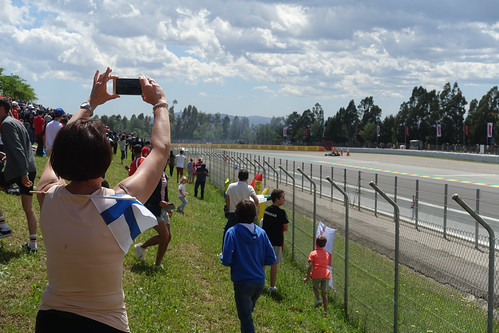 Now, I’m not a huge fan of Formula One, but just as with Rally Finland it is something legendary that has always loomed on the cultural horizon of Finland  – therefore arguably worth experiencing at least once in your lifetime, just as I argued with the rally previously.  There being two Finns driving (Valtteri Bottas & Kimi Räikkönen) for the two top stables makes this evil sport promoting reckless driving and environmental destruction especially worth visiting this season.

The race track is located north of Barcelona, almost at a halfway point between our base in Argentona and the city. You can check out the layout and basic facts on Wikipedia. We arrived there by car, which is not advisable – but completely manageable, if you come early and leave early before the race is finished. Most people don’t, and get stuck in the traffic jam. After all, the track has a spectator capacity of 140.000 people – and was supposedly sold out when we where there – so there are quite a few number of cars there…

The security checks were quite lax, but alcohol is totally forbidden so we didn’t even try to smuggle that with us. The track area exceeded my low expectations in how well it was managed – the crowds were surprisingly manageable, and we navigated on paved roads through the overpriced merchandise stores, fan areas and boringly similar hot dog stands towards the first vantage point. Like a walk in the park. 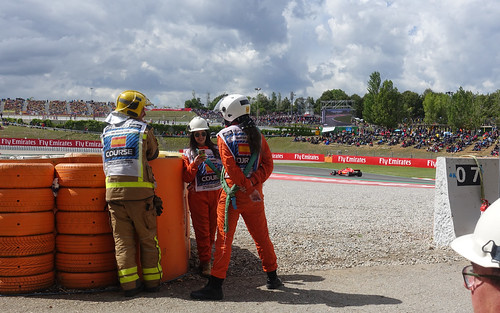 After enjoying the GP3-start (the starts are the best, see at least one close to the starting line) we decided to search for the main spot at the lawn on some part of the track with good visibility. And then eat something, although we had read online that this GP supposedly had the “worst food in all of Europe”.

Boy, was that statement right – I was cautious and just ordered a pretty average sandwich and drinkable coffee but those of us who ordered the “mixed grill plates” were thoroughly disappointed. In 2018 it should not be possible to con people anymore with pictures that depicted something completely different than what you got (all the menus were just conveniently in spanish). What looked like a huge platter of sausages, beef and tomatoes on a picture turned out to be an incredibly sinewy piece of meat and half a fried potato. Oh, and if you’re really thirsty for a beer, for some inexplicable reason a pint of non-alcoholic Heineken could be had for a mere 11 (!) euros. Non-alcoholic beer! For 11 €! Does not compute…

So, “bring your own food” is definitely a key ingredient of a successful Spanish GP track day. 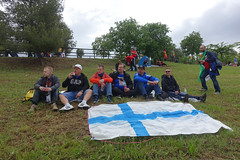 We only had the cheapest tickets for the race day (Sunday) bought in advance for approx. 90€ , but with those you can roam around the track and see different parts of it. The crowds weren’t too large and sitting on the lawn at corners of the eastern end of the track turned out to be a surprisingly good vantage point. Rain had been pouring heavily during the night and there was still some drizzle and rain clouds in the morning but somehow, the sun broke out during the day and it turned out to be just a nice, sunny spectating experience after all.

Also, in Spain the race day contains not only the F1 Grand Prix; this included the F3, F2 and Porsche Cup classes as well. So coming in the morning to see all the events not only lets you skip the worst traffic, you get to enjoy the day more too. 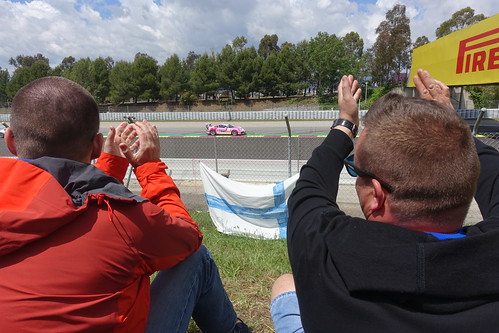 And the Formula One Grad Prix itself? Well, it didn’t feel quite as surreal seeing it in real life as I had thought it would be even if it was a bit strange seeing Hamilton, Vettel, Bottas, Räikkönen and the guys driving for real just a few metres away…  As is the case with motorsports, you get a better view of the race on TV than in real life because you only see a small part of the track at once so you cannot really compare live F1 with televised F1.

The start is usually the most eventful part, and so it was here too with a dramatic crash in the bend just before us taking out three cars. After that it became a bit boring since Lewis Hamilton was so much faster than everyone else. Kimi’s car failed him at some point but Valtteri Bottas made it to 2nd place so an OK result for the Finns even though we had hoped for a 1-2 victory! 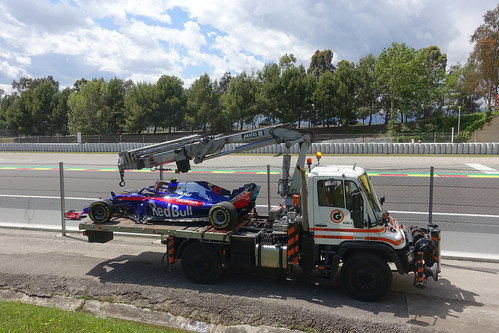 So, would I visit Formula One again? I mean, I don’t follow it or any other sports on TV. But, yes I would totally do it again *if* the following criteria are met: I get to see the race from the VIP area, visit the pits and hang out with the mechanics, eat caviar and drink champagne from the navels of supermodels and party at a luxury yacht on the sea afterwards. Then I’ll go again.

But hey – I will actually take you there now: here’s some exclusive video I shot so you can see and listen to what it was like!

Food: Shit catering – avoid at all costs, at least the expensive “menus” with misleading pictures of what you’ll get. Bring your own snacks and drinks. Alcohol is banned on the track area, but that’s OK since you’re not here for the drinking. Yes, even my fellow countrymen, please try to attend a sporting event without drinking sometime, it may actually improve the experience 😉

Things to do: Watch all the races (GP3, GP2 and the Porsche Cup). Imbibe the atmosphere. Enjoy the sun lying on the grass. Listen to engines roaring. Leave early from the main race when the result looks clear.

Verdict: If you want to experience a Formula One GP, then yes, this is a good place since the track is easy to access and the facilities work to the standards of western civilization – plus you’ll get to enjoy Barcelona as well. The engine sounds of the F1 cars are currently just not very good, so that might disappoint you.